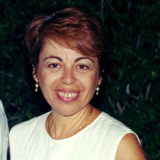 Dr. Zoi Papaioannou is since 1985 professor of Public Law at the Law Department in the Law Faculty of the Kapodestrian University of Athens and a professor of Police Law in the Academical School of Police Officers.
Additionally, as a law specialist in cases of public law and police law, she has been a legal consultant in the Municipality of Athens and in the Ministry of Public Order and also a member of the legislative committee of the same Ministry.
Her Phd is related to the public enterprises, financial institutions and especially the public entities, which function primarily according to the private law, but they also exercise public power, such us the Athens Exchange. Throughout her career, she has written three monographs, a legislation Code concerning the Greek Policing Bodies, has participated in scientific conferences worldwide and published articles in scientific journals.